For more on kids and trauma, visit our website www.earlytraumagrief.anu.edu.au 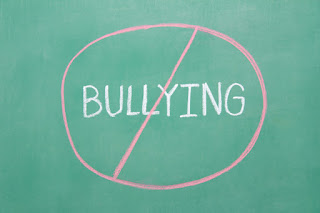 Children and bullying:
Bystanders and UP-standers

Bullying impacts a large number of school aged children every year, with 27% of Year 4 to Year 9 students reportedly being bullied during the previous school term (Cross et al., 2009). We know these rates will only have increased with the ongoing rise in usage of social media and unfortunately cyber-bullying. When discussing the problem of bullying, the majority of the focus has historically been placed on the bully themselves and discouraging or altering bully-centric actions (i.e., teasing, pushing, excluding).
Although placing attention on bullies and bully-centric actions can be worthwhile, recent efforts to curb bullying behaviour have focused on the role of bystander (see Padgett & Notar, 2013).
A bystander is someone who witnesses an act of bullying (either in the school yard, or in digital contexts in the case of Cyberbullying) but does not intervene in the bullying taking place (Padgett & Notar, 2013). In some cases, bystanders might even encourage displays of bullying. Bystanders constitute the third point in the Bullying Triangle, shown below: 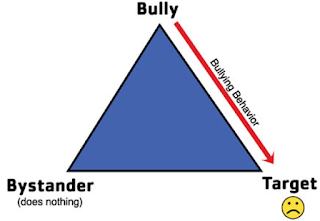 By encouraging bystanders to become “UP-standers”, they can help break down instances of bullying. UP-standers are people who offer support to targets of bullying. 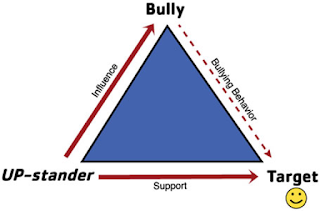 But how exactly does an UP-stander provide support to victims of bullying, and how does an UP-stander influence a bully’s actions? What can you tell some of the children you are working with in order to encourage them to be UP-standers? Below are some examples of some strategies you can share that can effectively supporting targets of bullying: 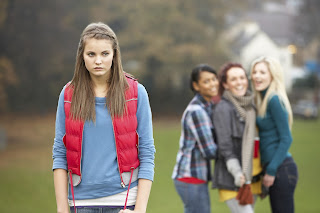 You can also discourage children to engage in some of the behaviours below, so that they don’t encourage the actions of a bully. Some advice you can give is:
Bullying impacts many school aged children every year. While focusing attention on bullies and their actions can be effective, it’s important to not forget about the role that bystanders play in the Bullying Triangle. By encouraging bystanders to become UP-standers, you can help to effectively reduce the problem of bullying, and improve circumstances for victims of bullying.
For more information about bullying, visit our Bullying resource sections on the TGN and ACATLGN websites:
http://tgn.anu.edu.au/resource/bullying/
http://earlytraumagrief.anu.edu.au/resource-centre/bullying


Posted by Australian Child and Adolescent Trauma, Loss and Grief Network at 17:04 4 comments:

As debate surrounding the treatment of refugees and asylum seekers continues, it is important not to lose sight of the traumatic experiences that those refugees who have already resettled in Australia may have experienced. Many resettled refugees will require ongoing support as they begin life in a new and often very different culture.

Many resettled refugees in Australia are likely to have experienced significant trauma in their lives. The nature of these traumatic events are as varied as the circumstances from which these individuals come, however, common sources of trauma may include:

Experiences such as these can lead to on-going mental, physical, social, and psychological problems even once the resettlement process has been completed. These problems are especially likely to occur in younger people, as they are less psychologically equipped to deal with traumatic events.

On-going struggles for resettled refugees may include:

Appropriate ongoing support can assist and has been demonstrated to lead to post-traumatic growth and recovery. When supporting resettled refugees, the factors likely to provide the most benefit include:

More details on assisting refugees in the resettling process can be found in our information resource Refugees and asylum seekers: Supporting recovery from trauma. This resource details the challenges people face throughout the different stages of the resettling process, and how children and young people in particular can be affected.

Settlement Services International
Settlement Services International are based in NSW, and provide a large range of services and assistance to refugees in Australia. In particular, they can assist with living arrangements/accommodation, foster care for young people, funding for business start-ups, assistance with employment, and community engagement events.

Red Cross Australia
Red Cross Australia can help refugees, asylum seekers, immigrants, and detainees with a variety of support services. These services include medical help, reconnection of separated family members, financial assistance during årelocation, as well as information and guidance regarding the access of Australian health care systems.

Posted by Australian Child and Adolescent Trauma, Loss and Grief Network at 15:49 4 comments: